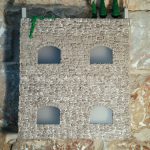 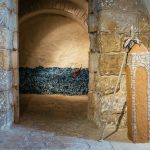 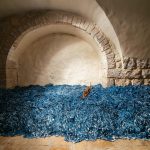 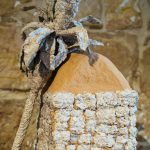 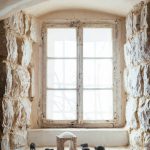 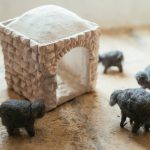 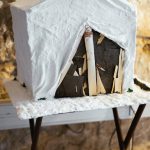 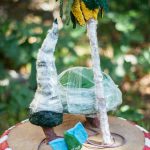 Neta Shira (Cohen) Arbeli’s exhibition, A Proposal for the Israel Pavilion (Sketch), is presented in two of the basement spaces of the former leper hospital in Jerusalem. This is Arbeli’s first solo exhibition, who hitherto has created mainly site-specific works. On this occasion, she has chosen to present a series of sculptures that she created in 2016, made of readily-available and inexpensive materials—such as wood cutoffs, plaster, paper pulp, sand and glue, acrylic and cardboard.

In one of the exhibition’s two spaces of the show is a series of sculptures dealing with a construal of urban space in Israel, with references to local architecture—both Arab and Israeli. One of the sculptures is a building in vernacular style (a DIY structure, or “architecture without architects”) with a date palm tree that has either collapsed, or been placed, or fallen asleep on it—a caress, as it were, by nature of a man-made object—or perhaps a subtle allusion to demolition.

Another sculpture depicts the Kakal (JNF) Square—a circular traffic island sculpted in sea sand, with a sign of the Jewish National Fund and three trees stuck on top. This is a kind of model of Israeli urban planning, based on a work of hybrid form of nature. The foreignness of the trees is underscored by the decision to envelope them in plastic wrap.

In another installation, Arbeli presents the front of a two-storey residential building clad in Jerusalem stone—in reference to the British Mandatory law that sought to preserve local architectural traditions, as a kind of intra-cultural reference to the aesthetic politics of pseudo conservation. Arbeli’s preoccupation with the import and export of nature and culture is a recurring theme in other works in this space.

In the other space of the exhibition is an artificial sea, made of newsprint and sanitary wipes soaked in plaster and painted blue, like an everyday ephemeral reality. On this artificial sea floats a Venetian gondola, bearing several decorated camels—modified trinkets from a tourist souvenir shop in the Old City of Jerusalem, en route to becoming a memory of a visit to the Holy Land. The juxtaposition of the two icons of popular culture—the gondola and camels—undermines their status as symbols of a particular culture, and turns them into a hybrid symbol of consumerism as a product of modern tourism. The gondola is taking the camels to an unknown, horizon-less destination. Together they are sailing forth on an artificial sea, in the basement of a former leper hospital.

Neta Shira (Cohen) Arbeli studied for a Bachelors degree at the Ceramics Department of the Bezalel Academy of Art and Design. After a stint as Artist in Residence at the Mamuta Center in Ein Kerem, she completed a Masters degree in Art at Bezalel. Her principal occupation is site-specific works, and sculpture.

In 2012 she took part in Ayelet Lerman’s project A Lot of Talk About Space, curated by the Sala-Manca Group at the Mamuta Center in Ein Karem.

In 2013 she presented a site-specific work at the Barbur Art Gallery in Jerusalem titled Inside Out, in which she collaborated with the artist Almog Ne’eman. In addition, she has taken part in group exhibitions at the Museum of Ashdod and at Menofim events.

Arbeli lives in Safed, where she has received an Artist-Teacher scholarship from the Ministry of Culture and Sport, and teaches art at the Chabad High School for Girls, at Hannah House in Safed.