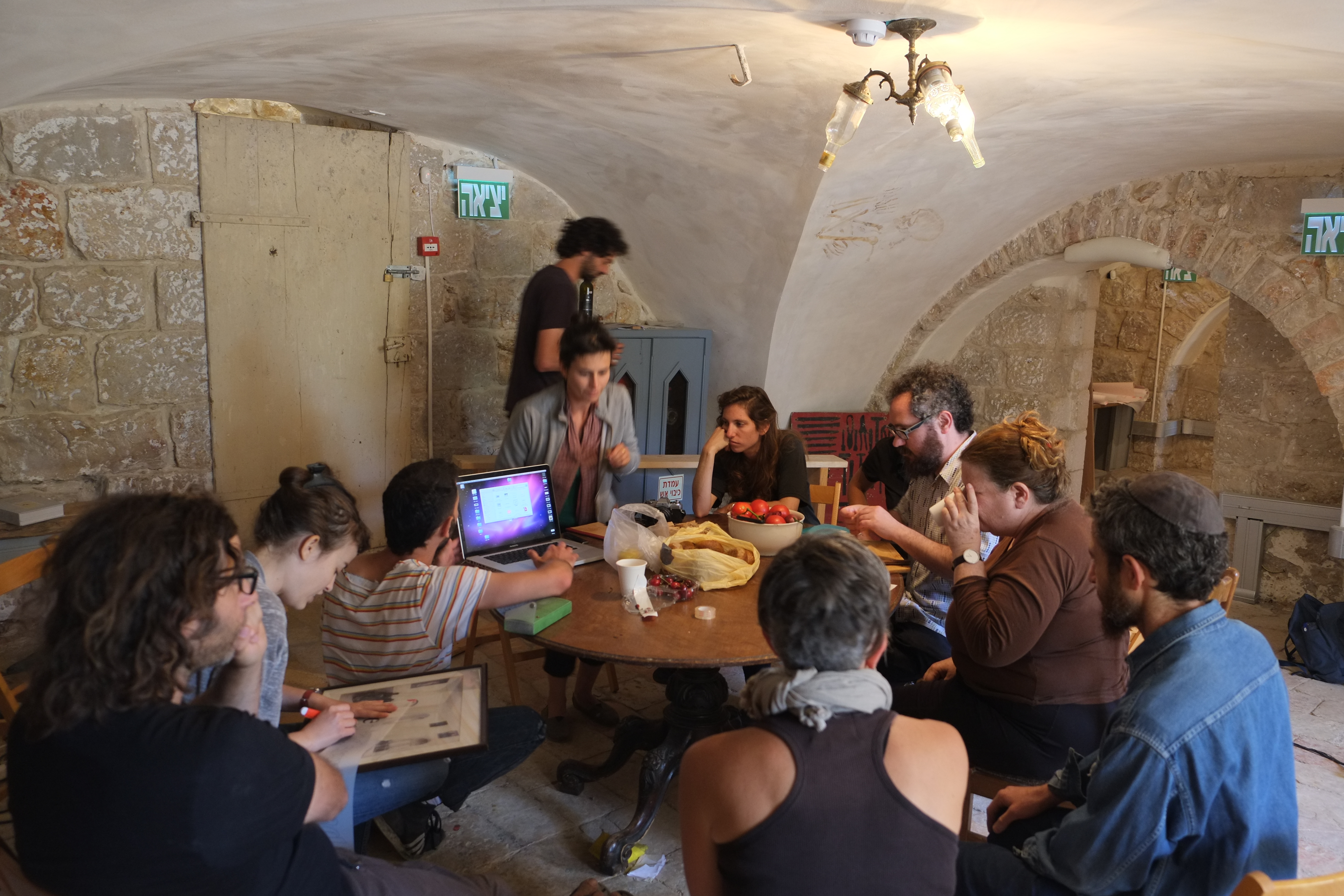 5 artists in residence, 2 artists in the internship
Period: 6 months with an option for additional 6 months extension

The second open call of Mamuta at Hansen house invites artists, scholars, writers, poets, architects, designers, programmers, planners and various intellectuals to apply to take part in the development group of the ongoing project of Mamuta and Sala-Manca: “The Underground Academy” [See below].

The artists in the residency and the internship will have:

• Possibility to receive financial support for projects developed at the center.

The residents are expected to:

• Work in the space at the center at least 12 hours a week.

• Participate in weekly meetings of the residents group in the aim of developing the joint projects (approx. 5 weekly hours from the total 12).

• The cost of the artist’s participation in the residency is the subsidized sum of 400 NIS per month, covering: work space, electricity, Arnona (municipal tax), water, and access to Mamuta’s common laboratories.

The internship artists program is held in the framework of Mamuta educational laboratory, and constitutes an opportunity for continued study, and being a part of an active and informed community of artists. The artists in the internship are considered a key component in the production, development and management of projects. The call is aimed at artists who graduated up to two and a half years from the start date of the internship.

The interns are expected to:

• Work in the space at the center at least 12 hours a week.

• Participate in weekly meetings of Mamuta’s projects development team for 5 weekly hours (from the total 12).

• Have willingness to engage in an artistic dialogue with the other artists at the center.

• The artists in the internship do not pay for the studio at Mamuta.

Gender, ethnicity, religion, nationality or age are not considered in the selection of candidates, which is based on the originality of the proposal, its quality, challenge and willingness to engage in a dialogue, collaboration and compliance with the demands of the projects.

The application should include:

• A text about the current practice, interest in The Underground Academy project and the project the participant wishes to develop at the center [up to 2 pages].

• A short text about the reasons and interest to join Mamuta.

• Sample of works, essays/texts/video and any other material that documents previous works or projects.

All materials have to be sent digitally to email: prod@mamuta.org

The Underground Academy – The Academy of the Contemporary

In 1963 Portuguese poet João Delgado had written, in an unpublished manifesto, that all museums, universities and sport clubs should be closed for at least one year in order to reopen all of them a year later. After Delgado had locked two municipal museums with his own locks he was arrested. In jail he wrote the outlines for The Academy of the Contemporary.

He himself (poet), Rodriguez (painter), Maura (theater critic), Tilsa Tilsona (a character in a play) and other prominent characters in his writings and life, became the first faculty of The Academy of the Contemporary, which advocated the development of ways of learning, researching, writing and experimental creation. It is not known whether any students were enrolled in the Academy, or whether this project interested other people beyond the five faculty members who would meet twice a week in nocturnal courses at Rodriguez’s house. After Salazar’s revolution, The Academy continued it activity in the underground “Lisbon” cinema theater, at the Lisbon leper house. The spaces of The Academy in the Cinema hosted groundbreaking art exhibitions and a publishing house which published 35 books and manuscripts that are now lost. The last book that was published was a book on the history of The Academy of the Contemporary, which was also an instruction book for the establishment of other academies of this kind. On the basis of this book we will gather in Mamuta in the upcoming year to develop a local version of The Academy of the Contemporary, which will be called The Underground Academy.

The Academy of the Contemporary – sister to the Museum of the Contemporary – aims to maintain a channel for the exchange of knowledge, learning, research and production of projects in the field of art.  The Academy has only one department, which is inherently trans-disciplinary, in the hope that fights between faculty members will lead to the formation of new departments. The new academy is a center for continuing art study, an institute of advanced studies, an independent study group and an artists’ collective. The Academy’s activity will be inaugurated with a ceremony of awarding an honorary doctorate to João Delgado as well as four other figures that will be chosen with the new faculty members.